How to Make Decisions Using Wartime and Peacetime Strategies 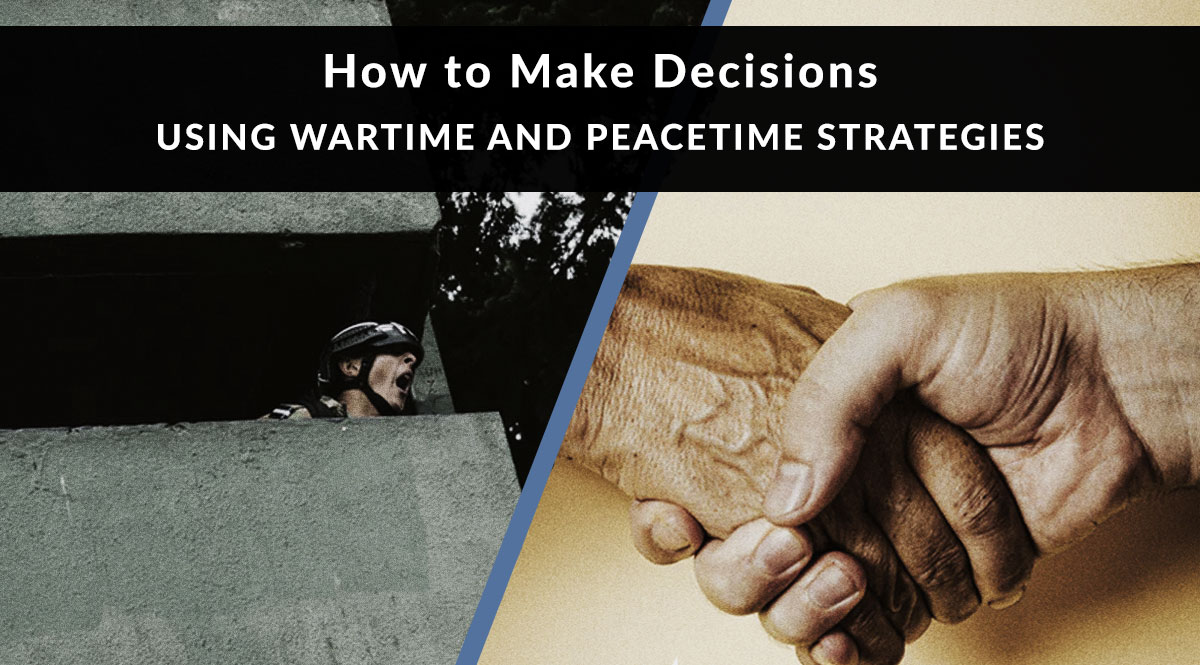 Back in October, Ryan Pinney wrote an article on LinkedIn evaluating the leadership characteristics of wartime and peacetime leaders.

In that article, Ryan explored what we learn about business leaders by looking at the characteristics of “wartime” and “peacetime” leaders in politics and the military. But we wanted to bring this topic to you, our readers, and widen the discussion. We've also gathered opinions from other Pinney team members to dig deeper into this comparison.

2020 didn’t go the way anyone thought it would, but we can still end it on a positive note. You’ve learned a lot about yourself this year. How do the skills you’ve learned help run your business on a day-to-day basis? Or how do they translate into big-picture ideas and long-range planning?

Keep both in mind while we look at wartime and peacetime leaders.

But there are many men and women who do things in a time of war that they wouldn’t dream of doing in peacetime, and all for the common good.

A wartime leader is like a general in battle: laser-focused on the next short-term goal. They’re short on time, resources, cash, and supplies. As a result, they need to get creative to achieve those goals using only what they have. They may need to break the rules to get things done, but that’s okay. The ends justify the means, because it’s often a matter of the company’s survival. Because of the stress, they’re not always the most friendly or approachable. At the same time, they often inspire deep loyalty because they’re in the trenches with the troops—er, employees.

In terms of business examples, think Elon Musk…or the guys from the TV show Silicon Valley.

One keeps healthy in wartime…by a vigorous assertion of values in which war has no part.

A peacetime leader isn’t facing the same kinds of challenges. They have more time and more resources, so they can think decisions through and seek consensus and buy-in from staff and mentors as frequently as possible. Because they’re not under the gun (literally and metaphorically), they can make long-range plans as well as short-term goals. They’re usually comfortable working within the system because there’s less of a reason to go outside the situational norm. If they don’t like the rules, they don’t have to break them – they can work from the inside to change them.

For a real-world example, think of the CEO of a well-established auto maker like Ford. Although Ford and Tesla both build cars, there’s a world of difference in their methods and the challenges they face.

Which Type Are You?

And now we want to know…which type are you? Click here to tell us in the comments!

Here are the answers from a few of us here at Pinney:

Ryan Pinney, President: I’m a 60/40 split in favor of wartime. Like a wartime CEO, I’ll do what it takes to win and have a tendency to let a battle mentality define my game plan. But like a peacetime CEO, I’ll do it with a contingency plan and buy-in from as many team members and industry leaders as possible.

Tracy Meier, VP Operations: I’d like to think I'm a mixture of both, but realistically I've been more of a “peacetime leader” in the past. There are benefits to being laser-focused to complete objectives in a short period of time, especially if you work in an organization that has limited resources. However, I think getting buy-in from the necessary teams is always critical. Getting that consensus often generates a fresh idea or two that may have not been considered without it. After the events of this year and becoming educated on the differences, I have a goal to apply qualities from both styles into the way I lead.

Candi Brundage, Application Division Manager: I feel like I'm more of a peacetime leader. I am not a rule-breaker and I like to make people happy. It’s important to me that I get others’ opinions before making decisions that will directly impact them.

Jenni Wiltz, Marketing Content Manager: I'm mostly a peacetime leader. I’d rather rewrite the rules than break them, and I prefer to have approval while doing it. Plus, I’m better at long-range planning than the drop-everything-else projects a wartime leader has to deal with. In a true emergency, I'm ruthless and practical - but those characteristics only come out in an actual emergency.

Who's a Better Business Leader?

Okay, so now we have to ask the inevitable question: who's a better business leader? If you check out any of the videos or articles on this topic, they’ll usually tell you the wartime leader is more successful. There are several reasons for this:

Getting emotional about things is a peacetime luxury. Wartime is much too painful.

Now let's look at a real-world example using Ryan’s favorite general, Black Jack Pershing. As a wartime leader during World War I, Pershing obsessed over details as small as a soldier's buttons on his uniform. He felt that discipline kept soldiers alive on the battlefield, so he refused to allow even the smallest lapses on or off the battlefield. Obsessing over details is a prime characteristic of the wartime leader. However, in the early 20th century, he was tasked with putting down a revolt in the Philippines. Pershing used tactics straight out of the peacetime playbook. He improved labor laws, recruited locals to help with law enforcement, and helped build schools.

Now take a moment to think about the skills you’ve gained this year. You’re using technology more than ever before. You’re better at communicating online. You’ve probably made contingency plans for another year of craziness. If you've weathered the storm that was 2020, you probably feel like a wartime leader. But you're also probably applying what you've learned to your long-term business plan. That means you're a combination of a peacetime and wartime leader.

Is Wartime vs. Peacetime a Valid Comparison?

So if Pershing was a combination of both, and most of us are also a combination both, it begs the question: why is this even a valid comparison? The problem isn't so much with this particular comparison as with either-or comparisons in general: they tend to devolve into stereotypes.

The direct use of force is such a poor solution to any problem, it is generally employed only by small children and large nations.

So we asked some of our team members if they thought there was anything useful to learn through the wartime/peacetime comparison. Tracy Meier said, "I believe this comparison is beneficial in reviewing the performance of leaders, or even doing self-evaluations. This year has been impactful to all industries, and we all had to pivot from our comfort zone."

Tracy has a point - maybe this comparison can be helpful for pivoting out of your comfort zone. So let’s see if we can apply it to a real-world situation and see how it can help you reach a new business goal. Say you’re thinking of adding another product to your business – disability income insurance, for example. How would a wartime leader do it? If a peacetime leader had the same task, how would that turn out?

Both strategies have clear benefits: the wartime strategy lets you generate and gauge interest without a lot of study time. The peacetime strategy helps you have a better conversation about DI because you have more answers than questions.

So which should you choose?

The smartest way to do it would be to combine the best parts of each approach. You could run a social media poll or survey of your email list to see if anyone’s already interested in DI. If so, you know it’s worth your time to learn more. If not, you didn’t waste the time and can always survey again later. You combined the quick action of a wartime leader with the let’s-think-this-out approach of a peacetime leader. As Tracy says, "The most successful leaders are continually evolving and picking up new styles of sharing their expertise with their tribe."

Can the Wartime/Peacetime Analogy Help You Be a Better Person?

Our Candi Brundage also had an extremely insightful take on why the wartime/peacetime comparison is valid in the workplace. She said, "It's helpful to understand where leaders are coming from. I look at this much the same way we use our Kolbe scores. When you understand the type of leader they are, the way they make decisions makes more sense, especially when it's different than your own personal style of leadership." That Kolbe score she's referring to? It's a type of personality test that identifies the way you take action. Everyone here at Pinney takes that test. It's a great way to help others understand how you work, as well as to understand how they work.

Kolbe results are classified into four main categories: Fact Finder, Follow Thru, Quick Start, and Implementor. Knowing that someone is primarily a Fact Finder, for example, explains why they may take awhile to carry out an order - they're researching and vetting a process (like a peacetime leader). Someone who scores highly as a Quick Start, on the other hand, is going to jump into action and get stuff done ASAP (like a wartime leader).

This may be the most helpful way to use this comparison. The next time you're frustrated by a client or a co-worker, ask yourself which mindset they might be operating with. Does that behavior make more sense? Is there a way to shift the discussion so that a peacetime leader sees the issue as worthy of a wartime effort, or vice versa?

That's our look at how to make decisions using wartime and peacetime strategies!

We're still dying to know what you consider yourself: wartime or peacetime? Tell us in the comments!

If so, please leave us a Google rating or review! It really helps others discover us and our content online.