Sales Is Not a Dirty Word 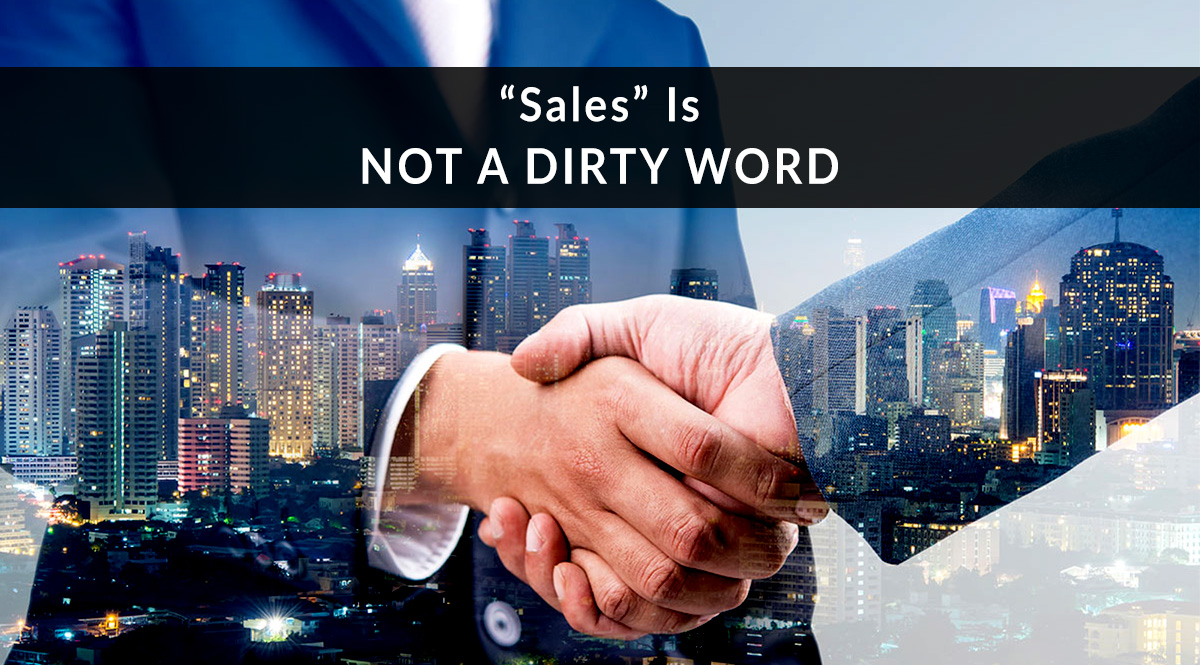 There’s a stigma that comes with being in sales. The words that spring to mind aren’t good ones. People outside the industry probably think of words like aggressive, sleazy, or pushy. When you ask a kid what they want to be when they grow up, “salesperson” probably isn’t the answer.

That fact won’t change as these kids grow up. They’ll finish high school, go off to college, and seek out careers in fields like law, charity work, or the tech industry.

But many people don’t realize that each of those fields involves sales. A lawyer has to sell a judge and jury on the merits of a case. A charity needs to sell its cause to potential donors, or it won’t have anything to give away. A successful tech startup needs investors, which requires selling those investors on the company’s future profitability.

Are those professions treated the same way as sales?

But there’s no denying that everyone sells, whether they realize it or not.

Sales gets a bad rap because it’s associated with the desire to make money—often at the expense of the customer. But sales isn’t just about money. It’s also about discussion, debate, persuasion, and motivating others to see something the same way you do.

Sales affects nearly every facet of our lives, no matter what your profession:

These examples involve selling an idea, not a product, but no one thinks these situations are as uncomfortable as a visit to a used car lot, for example.

As human beings, we’re always selling something. Name a situation, and chances are you’re selling a perception of yourself. It happens with the opposite sex, friends, co-workers, waitstaff, and just about everyone else you interact with. While this sounds manipulative, it doesn’t have to be. It’s just the reality of back-and-forth, give-and-take communication.

There’s nothing dishonest about understanding the art of perception and persuasion. Some of the world’s greatest minds have studied this process, and as salespeople, we should be proud to continue in that tradition.

The Philosophy of Sales

It’s easy to make a case that the ancient Greeks were the first to study sales—except they called it rhetoric. The idea was the same, though. The speaker’s job was to persuade an audience that he or she was correct, using a pattern of verbal techniques. Sales is no different. It just brings a purchase into the equation if you "win" the argument.

As a salesperson, however, we often need to do more than convince someone that we have a good idea. We might also have to convince them that they're wrong.

As far back as the 17th century, a philosopher named Blaise Pascal figured out how to get people to change their minds. You may have seen this story on Quartz back in September. So what's Pascal's strategy? Start by pointing out the ways the other person is right. This eases their mind, and lets them know you’re not attacking them. Then you can shift the discussion and ask questions that help them see the other side of the issue, discovering the counter-argument on their own.

As Pascal said, “People are generally better persuaded by the reasons which they have themselves discovered than by those which have come into the mind of others.”

If you find common ground with a prospect before asking questions about their financial plans for the future, you’re applying a theory from one of the 17th century’s greatest philosophers.

Not bad for a job that gets treated like a four-letter word, right?

The Psychology of Sales

Let’s look at a more modern example. You might have already heard of psychologist and author, Dr. Robert Cialdini. His client list includes Google, Microsoft, Nationwide, and Prudential. He’s widely regarded as the foremost expert on the science of influence. Based on years of research, he's compiled six principles of persuasion in his book, Influence: The Psychology of Persuasion.

Even if you didn't realize it, you probably use several of Cialdini’s principles of persuasion on a daily basis:

That sounds like a playbook of sales techniques, but it’s also psychology rooted in years of research.

Again, not bad for a job that gets treated like a four-letter word.

The Study of Sales

Last but not least, you may have heard me talk about The Challenger Sale by Brent Adamson and Matthew C. Dixon. This book separates salespeople into five categories based on their tactics. The most successful type, the Challenger, does a lot of things that seem counter-intuitive at first.

When the client is ready, the Challenger presents a solution. By speaking with authority (and extensive knowledge about the customer's situation), Challengers earn the customer’s respect…and, often, the sale.

If you’ve used any of these techniques, you’re applying the results of one of the largest studies ever done in the field of sales. The authors began by studying 700 salespeople, then expanded the study to include 6,000 salespeople across 90 companies.

Be Proud of Your Ability

Sales is not a dirty word.

Like many professions, it has a deep tradition of study and experimentation behind it.

I’m proud to tell people I sell insurance. We sell a product that helps families provide for one another if something terrible happens. As advisors, we’re helping our clients find financial peace of mind. As salespeople, we’re using techniques that philosophers, scientists, researchers, and psychologists have studied for centuries.

I’m proud of our industry and of being able to sell. I hope you are, too.