Why You Need a Strong Second-in-Command 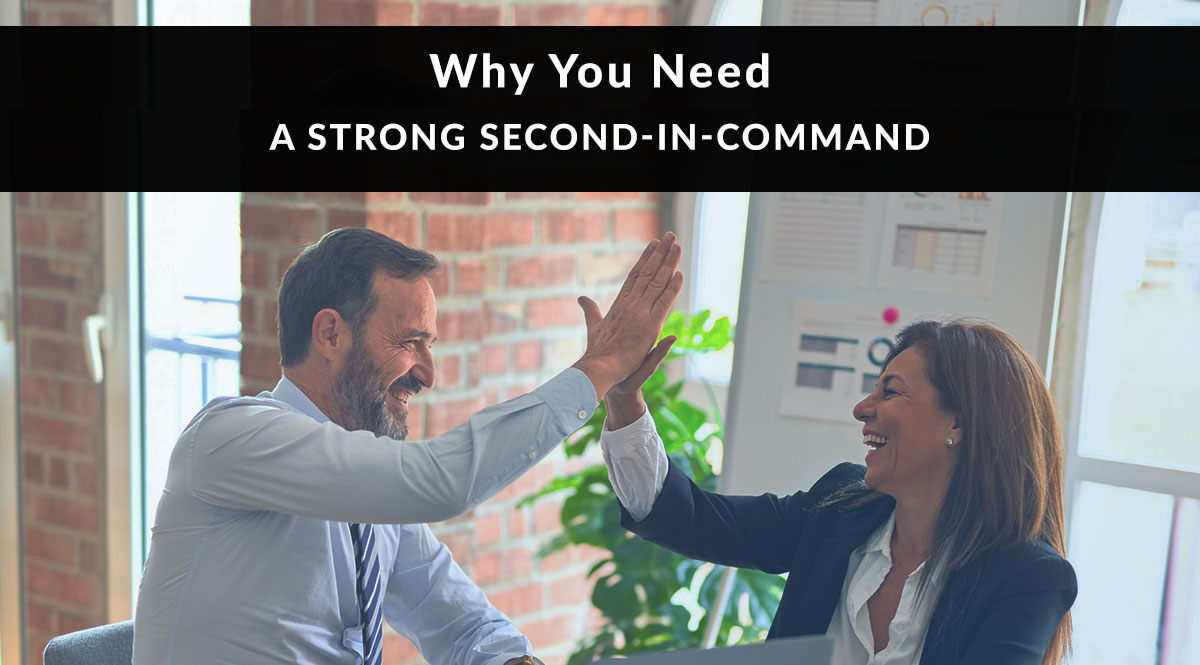 This is the second post in our ongoing series on leadership, inspired by Ryan Pinney’s recent LinkedIn articles.

Today’s business culture celebrates the strong leader: the entrepreneur who built a billion-dollar company from nothing, or rescued an existing company from debt and obscurity.

From Steve Jobs to Jeff Bezos, Mark Zuckerberg, and Elon Musk, we’re obsessed with the idea of a visionary who single-handedly changed an industry. Of course, Apple, Amazon, and Tesla aren’t one-man shows…and that’s the point.

Somewhere along the way, we forgot that none of the “great men” of history got there alone. Headlines get more clicks when we turn a business’s story into a hero’s journey. It makes the story more dramatic and relatable – we, the audience, can each imagine ourselves in that hero’s corner office. It’s much less glamorous to imagine ourselves in Zoom meetings.

But there’s tremendous value in having a strong second-in-command (2iC). Real leaders not only understand this, but depend on it – and actively seek out people with strengths that complement their weaknesses.

The best executive is the one who has sense enough to pick good men to do what he wants done, and self-restraint to keep from meddling while they do it.

If you’re a one-man shop, you might be tempted to skip this post. But in our business, there’s always someone behind the scenes. It might be carrier representatives, the technology vendors who provide you with online tools, or a BGA (that's us!). These folks are your 2iC, running things in the background so you can grow your business. With that in mind, you can apply the criteria below to your current partners and vendors to make sure they’re focused on helping you grow.

Because as we’re about to find out, the people you surround yourself with are the key to your success.

Now let’s look at a few real-world examples that show how much more you can get done with a strong 2iC.

Surround yourself with the best people you can find, delegate authority, and don’t interfere as long as the policy you’ve decided upon is being carried out.

How to Choose a Strong Second-in-Command

So how do you go about picking a 2iC?

Here are some qualities to look for:

Hire people who are better than you are, then leave them to get on with it . . . Look for people who will aim for the remarkable, who will not settle for the routine.

Ready to Build Your Team?

If you already have a team, start looking for potential #2s. Not planning on expanding or promoting anyone right now? That's okay. You have plenty of time to watch and make character assessments before the time comes to make that choice.

Ryan suggests looking for people who aren’t just your Mini-Me. “I see the personal benefits of this,” he said, “with Tracy and Katie both bringing skills and abilities I don't have to the table.”

As we look ahead into the next century, leaders will be those who empower others.

If you’re a lone wolf who loves the limelight, think about what you could achieve with help. Could you spend more time on sales if someone took care of admin and marketing? Could you sell other products if you had more time to get familiar with them?

Asking for help can buy you that time.

Is the idea of sharing your ideas and responsibility still scary? You don’t have to do it all at once. One of Tracy’s favorite leaders, business coach Rachel Hollis, explained how hiring help as an investment in the business took that business to the next level: “I challenge you to weigh it [the expense of hiring help] against the level of content we’ve been able to push out into the world in the last five years. I wouldn’t have been able to do a tenth of this work if I hadn’t had help.” (RISE podcast, episode 96)

That’s how a lone wolf grows into a true leader.

Leadership is the art of getting someone else to do something you want done because he wants to do it.

That's our quick look at why you need a strong second-in-command!

Do you have a second-in-command...or two or three? How did you know they were the right people for the job? Tell us in the comments!